How to Belt without Belting

The key to a successful “pop” sound is easier than you think. And while other a cappella directors have their own ways of instructing singers in the art of belting (see: Dr. Erin Hackel, director of MIX and LARK), there is a method I use that works for me. If you want your a cappella group to start sounding like a pop group and less like a choir, WITHOUT damaging their vocal cords, keep reading.

The key to maintaining “chest voice” (which is the pop sound you want) is a combination of vocal techniques that you must reinforce at every rehearsal. The easiest way to do this is with warm-ups.

Warm-ups are typically seen as the bane of every group’s existence. Why do we have to do these silly exercises when all we want to do is sing our repertoire? I have posted several articles about how improvisation should be included in your warm-up routine, but make no mistake. Warm-ups are the most important part of your rehearsal.

Here. Let me say that again so you understand.

When I rehearse with my a cappella choir, these are the exercises I use to train singers into achieving the “pop” sound I am looking for. Success with this does not happen overnight, but in time, they are able to sustain higher, longer notes without any vocal pain.

What is resonance? Resonance is bringing the vibrations of your sound into the front parts of your face, so that the natural cavities in your skull can amplify the sound. To learn how to resonate, you need to research one of the most famous singing groups of all time…Alvin and the Chipmunks.

To train a group’s resonance, I usually start with exercises sung completely (that’s 100%) in the nasal cavity. Yes, this sounds awful. Yes, it sounds ridiculous. Yes, it sounds like Alvin and the Chipmunks are being tortured on a medieval rack. But it is vital to the pop sound you eventually want to get.

Choose any warm-up your group is familiar with, and make them sing the warm-up, entirely through their nasal cavity, from start to finish. Make sure that this warm-up goes very high and DO NOT let them slip back into head voice. They need to chipmunk-it-up throughout the whole thing.

While this sound is obviously not what you want to end up with as a final product, it does teach a fundamental concept of resonance- placing the sound forward and up. With enough repetition of this exercise, you’ll find that your sopranos can probably sing a high E-flat or F in a nasal tone. Once they can do that, you are ready to move on to phase two.

You need to teach your singers how to access their “power.” The power in this case is the strength to reach and support those high notes. Ever hear a singer “crack?” That’s because singing high takes a tremendous toll on your vocal cords. It’s like walking into a gym on your first day of training and trying to deadlift 300 pounds. Only a rare few in the world have enough built-in muscle to be able to do something like that. The rest of us are scrawny wimps who need to build that muscle.

The power comes from your support system, a.k.a the gut. Remember when vocal teachers would tell you to “use your diaphragm?” That’s a load of bull. You can’t “use your diaphragm.” The diaphragm is an involuntary muscle and isn’t triggered by you consciously “accessing” it. It functions in conjunction with the other muscles in your respiratory system. What you CAN control is the stomach.

The stomach, or “man’s best friend” as I like to call it, is what you need to control to get enough “oomph” to lift those high notes out of your body. The easiest way to do this is to use exercises on HA or HO or HOO, or whatever vowel, as long as it begins with an H.

I ask my choir to sing the following exercise with their hands on their stomach: 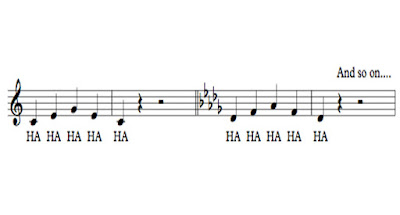 I emphasize two things: First, your stomach needs to pulse. You need to feel like that stomach is getting a workout, like you are belly laughing. Second, I need to HEAR the H. If the vowel is wrong, I don’t care (eventually I do care, but that comes later). I need to hear that H sound. If I can’t hear it, that means someone is singing a “glottal” attack, or a HA without the H. That’s bad.

3) Think nasal. Use the force.

Now that we’ve shown your singers where to place the sound and how to support the sound, we need to eliminate that whiny “nasal” sound, because no pop star sings like that. (except maybe Aaron Neville…and Justin Beiber) The next exercise is just one example of how to remain in the resonant space while not singing completely through your nose.

In a fast tempo, have your singers sing the following phrase: Here’s another exercise that I find useful: 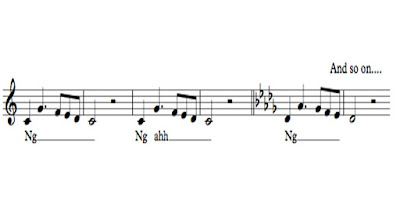 The open mouth hum, or “NG” sound, is perfect for directing the vibrations exactly where you want them to go. When the singers eventually open to an “ahh” vowel, they should take special care that NOTHING about their singing approach changes. The only different between “NG” and “AHH” is that their tongue is releasing itself from the roof of the mouth, thus enabling the singer to produce a clear tone.

I have found through years of voice lessons that when it comes to “belting” high notes (and by belting, I mean singing in chest voice), one of the biggest obstacles is fear…fear that they will sound stupid or crack or hurt themselves.

To fight this fear, you need to rev up their vocal engines. You can’t immediately start singing high without starting low and working your way up. Fast call and response exercises, where your best soloist sings a phrase, everyone repeats the same phrase, and the exercise is repeated up a half step, can really get the energy flowing in the room and give the singers some much needed confidence.

The moral of the story is this: The higher they go, the more resonance they need.

One recent vocal student wanted to sing a Beyonce song, with a high Gb and she didn’t want to switch to head voice. Every week, I trained her bit by bit to sing higher and higher in a resonant tone, by combining the nasal exercises with the support exercises. Within four weeks, she nailed the high Gb. And the way she did it was this: When she reached that high Gb, she sang it totally nasal and it didn’t sound nasal at all because the note was short and she worked up to it.  (In case you were wondering….the song was 1+1)

Try it. But if it hurts (which it shouldn’t if you do it right) stop immediately.

Marc Silverberg
Follow The Quest For The A cappella Major:
Twitter.com/docacappella
Acappellaquest.blogspot.com


Docacappella.tumblr.com
Posted by Marc Silverberg at 10:07 AM 3 comments: